I woke up this morning to read The Federalist quoting me out of context, putting words in my mouth that I did say but wished I had worded more carefully. For those not familiar with The Federalist, they are a right wing online magazine.

The paragraph in question was:

“This opens up the possibility that we could stabilize the climate for affordable amounts of money without changing the entire energy system or changing everyone’s behavior,” Ken Caldeira, a senior scientist at the Carnegie Institution for Science, told The Atlantic.

Here is the full email I sent to Robinson Meyer, writer for The Atlantic:

I am no expert in systems costing, but I read the paper as saying that Direct Air Capture of carbon dioxide would cost somewhere in the range of $100 to $250 per ton.

If these costs are real, it is an important result.

Carbon prices projected for this century look like this for 2 C stabilization from a business-as-usual scenario: 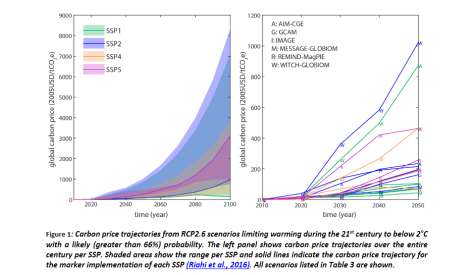 If you notice, by the end of the century, these integrated assessment models project carbon prices of many hundreds if not thousands of dollars per ton CO2.

The IPCC estimated that these levels of carbon prices could shave 5% off of global GDP.

The result of David Keith and colleagues suggest that carbon prices could never go above the $100 to $250 range per ton CO2, because it would be economic to capture CO2 from air at that price.

This suggests that the hardest to decarbonize parts of the economy (e.g., steel, cement manufacture, long-distance air travel, etc) might continue just as they are now, and we just pay for CO2 removal.

To put these prices in context, $100 per ton CO2 works out to about $1 per gallon of gasoline. This suggests that a fee of somewhere between $1 and $2.50 per gallon would allow people to drive their ordinary cars, and we could just suck the CO2 out of the atmosphere later.

This opens up the possibility that we could stabilize climate for affordable amounts of money without changing the entire energy system or changing everyone’s behavior.

To give more context, global CO2 emissions is something like 36 GtCO2 per year. If we were to remove all of that with air capture at $100 per tonCO2, that works out to $3.6 trillion dollars.

Depending on how you count things, global GDP is somewhere in the neighborhood of $75 to $110 trillion. So, to remove all of this CO2 would be something like 3 to 5% of global GDP (if the $100 per ton number is right). This puts an upper bound on how expensive it could be to solve the climate problem, because there are lots of ways to reduce emissions for less than $100 per ton.

In any case, it makes it much easier to deal with the hardest to decarbonize parts of the economy.

Again, this is all with the caveat that I am no expert in costing of engineering systems. But, if this paper is correct, the result seems important to me.

My colleagues and I have been spending a lot of time thinking about how we are to decarbonize the hardest parts of the energy system to decarbonize. We have a paper in press on this very topic, which we expect out later this month.

My positions are fairly well known. In MIT Technology Review, I wrote in 2015:

In that piece, I went on to write:

When the Constitution of the United States of America was written, it seemed inconceivable that people would be released from slavery or that women would vote. Just a few years before gay marriage became the law of the land, it would have been impossible to predict such a sweeping change in social attitudes. For us to even have a chance of addressing the climate problem, we’ll need another huge change in public attitudes. It will need to be simply unacceptable to build things with smokestacks or tailpipes that dump waste into the air. This change could happen.

The point with my poorly worded quote was not that we don’t need revolutionary changes in our energy system, but that there are some very hard-to-deal-with sources of CO2 emission, like long-distance aviation, that could be addressed by using hydrocarbon fuels coupled with contemporaneous capture of CO2 by devices like that being investigated by David Keith and colleagues.

As recently as 1 June 2018, I wrote an email to Peter Frumhoff of the Union of Concerned Scientists, urging that organization to put out a statement saying:

As a little egomaniacal side note, I would like to point out that Caldeira and Rampino (1990) may be the first paper to point out the approximately 300,000 year time scale for removal of atmospheric CO2 concentration perturbations by silicate rock weathering. This estimate has held up pretty well over the last decades.

What are the lessons learned?

When speaking or writing an email to a journalist, think about how each sentence can be read taken out of context. Even if you trust the journalist to represent your views well (and I think Robinson Meyer did an excellent job), somebody later can take a carelessly worded statement and use it out of context.

Also, we are busy, and when requests come in, we often try to respond with something quickly so we can get back to our day jobs (which in my case happens to be scientific and technical research). I should slow down a little bit and take the time needed to write more careful prose.

So, what do you do when a poorly expressed idea is quoted out of context by people with a political agenda?

One thought on “What do you do when a poorly expressed idea is quoted out of context by people with a political agenda?”