ClimateFeedback.org contacted me asking what I thought about Bret Stephens’ first column in the New York Times. Here, is a slightly edited version of my response.

Science is the process of falsification. Hypotheses that have withstood a large number of attempts at falsification, and that are consistent with a large body of established theory that has also resisted falsification, are widely regarded as true (e.g., the Earth is approximately spherical). Many hypotheses of modern climate science fall into this category.

It is also true that some ‘environmentalists’ go far beyond the science in making claims, but that is not cause to denigrate the science.

Yes, we should take uncertainty into account when developing policy, but we should recognize that those ‘sophisticated but fallible models’ are as likely to underpredict as overpredict the potential consequences of our greenhouse gas emissions.

Stephens would have been on more solid ground if he would have confined his comments to uncertainty in the ability of human systems to adapt to the relatively more certain projections of changes in the physical climate system. Will we be able to give up low-lying countries and the major coastal cities of the world (New York, London, Tokyo) without much of a transition cost? Will people in India and the Sahel be able to migrate or air-condition their way out of the harsh conditions projected for those areas? These are open questions about which well-informed people can disagree.

It is dangerous to act as if uncertainty in climate model projects justifies inaction. Uncertainty equals risk. One way to reduce uncertainty is to increase the amount and quality of climate science being conducted. Another and more important way of reducing uncertainty is to reduce human influence on the climate system. This requires a major transformation of our energy system to one that does not rely on the atmosphere as a waste dump for our CO2 pollution.

Climate science does not offer complete certainty about the future. Instead, it points to substantial risks and ways to avoid that risk.

Straw-man attacks on climate scientists do not productively advance the discussion.

For reference: My first reaction to the announcement of the The New York Times decision to hire Bret Stephens. 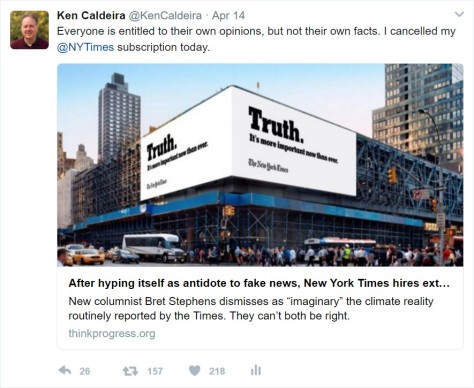 13 thoughts on “Climate of Risk and Uncertainty”